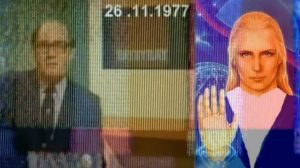 On Saturday 26 November 1977 Southern TV’s Andrew Gardner was presenting the early-evening news. At 17:10 the TV picture wobbled slightly, followed by a deep buzz. The audio was replaced by a distorted voice delivering a message for almost six minutes.

The individual identified himself as Vrillon, a representative of the Ashtar Galactic Command.

The interruption ceased shortly after the statement had been delivered, transmissions returning to normal shortly before the end of a Looney Tunes cartoon. Later in the evening, Southern Television apologised for what it described as “a breakthrough in sound” for some viewers. ITN also reported on the incident in its own late-evening Saturday bulletin.

A complete transcript of the alien message

This is the voice of Vrillon, a representative of the Ashtar Galactic Command, speaking to you. For many years you have seen us as lights in the skies.

We speak to you now in peace and wisdom as we have done to your brothers and sisters all over this, your planet Earth. We come to warn you of the destiny of your race and your world so that you may communicate to your fellow beings the course you must take to avoid the disaster which threatens your world, and the beings on our worlds around you.

This is in order that you may share in the great awakening, as the planet passes into the New Age of Aquarius. The New Age can be a time of great peace and evolution for your race, but only if your rulers are made aware of the evil forces that can overshadow their judgments.

Be still now and listen, for your chance may not come again. All your weapons of evil must be removed. The time for conflict is now past and the race of which you are a part may proceed to the higher stages of its evolution if you show yourselves worthy to do this.

You have but a short time to learn to live together in peace and goodwill. Small groups all over the planet are learning this, and exist to pass on the light of the dawning New Age to you all.

You are free to accept or reject their teachings, but only those who learn to live in peace will pass to the higher realms of spiritual evolution. Hear now the voice of Vrillon, a representative of the Ashtar Galactic Command, speaking to you.

Be aware also that there are many false prophets and guides at present operating on your world. They will suck your energy from you – the energy you call money and will put it to evil ends and give you worthless dross in return.

Your inner divine self will protect you from this. You must learn to be sensitive to the voice within that can tell you what is truth, and what is confusion, chaos and untruth. Learn to listen to the voice of truth which is within you and you will lead yourselves onto the path of evolution.

This is our message to our dear friends. We have watched you growing for many years as you too have watched our lights in your skies. You know now that we are here, and that there are more beings on and around your Earth than your scientists admit. We are deeply concerned about you and your path towards the light and will do all we can to help you.

Have no fear, seek only to know yourselves, and live in harmony with the ways of your planet Earth. We here at the Ashtar Galactic Command thank you for your attention. We are now leaving the planes of your existence. May you be blessed by the supreme love and truth of the cosmos.

The incident caused some local alarm and attracted publicity. In the next day’s Sunday newspapers, the IBA announced the broadcast was a hoax. The IBA confirmed it was the first time such a hoax transmission had been made.

Hundreds of worried viewers flooded Southern Television with calls on Saturday night after the voice from outer space interrupted the routine news program for more than six minutes.

Reports of the event carried worldwide with numerous American newspapers picking up the story from the UPI press agency.

The broadcast became a footnote in ufology as some chose to accept the supposed “alien” broadcast at face value, questioning the explanation of a transmitter hijack.

Within two days of the incident’s report in The Times, a letter to the editor published on 30 November 1977 asked, “[How] can the IBA – or anyone else – be sure that the broadcast was a hoax?”

The editorial board of one American local newspaper—the Eugene Register-Guard—commented, “Nobody seemed to consider that ‘Asteron’ may have been for real.” By as late as 1985, the story had entered urban folklore, with suggestions there had never been any explanation of the broadcast.