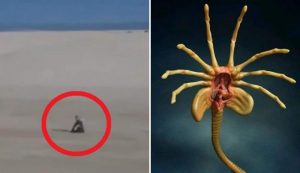 A mysterious recording obtained on April 8 this year somewhere in the Mexican part of the Chihuahua desert is spreading around the Internet. Amazing video demonstrates a strange being, similar to a snake-like creature with a large head.

It is reported that an eyewitness was recording on video desert on his mobile phone and quite accidentally noticed this anomaly. The Mexican was so frightened by what he saw that he immediately rushed away, not wanting to get a better look at the strange creature.

Many ufologists, conspiracy therapists and ordinary people thought that the operator had stumbled upon the real representative of an extraterrestrial civilization in the desert. The alleged alien moves noticeably on the recording, so the version of a living creature of unexplored nature turned out to be very popular among Internet users.

According to some commentators, an alien aircraft could have recently crashed in Chihuahua.

However, there is another opinion: it is an animal unknown to science, a mysterious inhabitant of the desert, like a Bigfoot, for example. From where all these creatures come from, nobody knows, but they are constantly encountered by people.

So the Mexican acted quite reasonably when, upon seeing this “something”, he simply ran away. If he hadn’t done this, perhaps there would not be a video on the Internet.