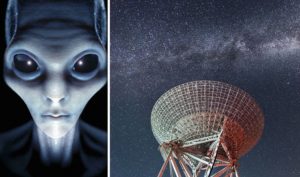 We could be listening for the incorrect kind of alien signals, according to researchers. An intelligent alien civilization could beam quantum messages to Earth, reports sciencenews.org.

If aliens wanted to send us messages from 30 light years away, their best bet may be to use X-rays and quantum technology.

On Earth, researchers have previously encoded information into the quantum states of particles of light, or photons. Using the photons’ special properties, they have transmitted that information securely. Research teams have sent the data to other labs around the world – as a proof of concept for a quantum internet – and to satellites orbiting Earth.

“A major obstacle to quantum communication is decoherence, in which a quantum particle loses its quantumness as it interacts with its surroundings.

“Quantum states you generally think of as very delicate, and if there’s any kind of external interaction, you kind of destroy that state,” Berera says.

According to a new study, quantum communication has the potential to work over vast distances through space – not only across solar systems, but also across galaxies.

If this is true, then if we actually had a way to pick up such communications, we could potentially be privy to an entire intergalactic network of messages from all corners of the universe.