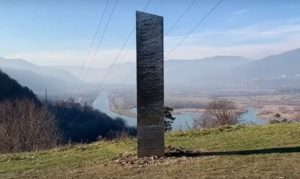 A few days ago we wrote that a huge metal monolith disappeared in Utah (USA). Local authorities had no idea who could pick it up. An eyewitness saw that the object was transported in a truck. According to the latest information, an object very similar to that of Utah was found in Romania.

The Romanian monolith was discovered on November 26 on a hill near the town of Piatra Neamt, a few meters from the ruins of the Dacian fortress of Petrodava.

According to a representative of the department for culture and historical heritage, local authorities are studying the mysterious appearance of the four-meter monolith. The fact is that for the installation of this structure, a permit approved by the Ministry of Culture of Romania is required.

Unlike the American rectangular monolith, this structure has the shape of a trapezoid with a beveled top. Moreover, on its surface, various incomprehensible patterns are visible.

Earlier, the media wrote that the discovered structure in the Utah desert is very reminiscent of an alien obelisk from Stanley Kubrick’s movie “A Space Odyssey 2001”, with the only difference that it is not black, but metallic in color.