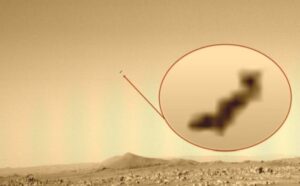 The object is not a speck of dust on the camera lens since 4 images taken at the same time show that the object only appears in the third image. It looks like there is something flying in the sky, reports ufosightingshotspot.blogspot.com.

The image shows something in the Martian sky that doesn’t look natural. Could the object be of alien origin?

The Perseverance rover is the biggest astrobiology mission NASA ever launched. It will also set up the first-ever sample return from another planet.

Unexpected anomalies on photographs taken on Mars and the Moon and beamed back to Earth for further examination by NASA are nothing new.

NASA has not commented on any of the strange sightings so far, but alien hunters have suggested that these are alien ships monitoring humans’ baby steps into the universe.

An open mind is required when viewing images from other planets. One day our very survival may depend on it.