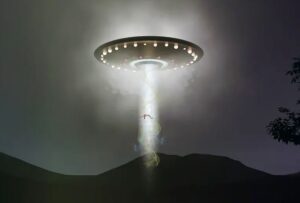 Footage of the incident, recorded in 2010, went viral last year – after BirminghamLive published the clip obtained by Birmingham UFO Group (BUFOG). The woman appeared to “dematerialize” beneath her bed sheets and suddenly remerge 12-and-a-minutes later.

The video can be viewed below.

The eerie footage was taken by a family from Droitwich a number of days after the mother had vivid recollections of an abduction experience.

The camera was set up by her husband in an effort to set her mind at ease and help her sleep better after this incident. During this particular night she had a second abduction experience and in the morning the camera footage taken throughout the night was checked.

In the footage the father is on the left and the mother on the right sleeping under a duvet. The duvet on the mother’s side is lifted up but then falls flat on the bed, giving the appearance that she has vanished. After 12.5 minutes time the duvet again lifts up very high and when it settles the mother is once again visible.

The family were unable to extract the video file from the infra-red camera as it was not intended for this purpose. To get round this they connected the camera to a monitor and then recorded the screen.

Dave Hodrien, lead investigator at BUFOG, analysed the footage and concluded in a report it appeared to be “genuine and not a deliberate hoax”.

BirminghamLive approached Mr Pope – who investigated reports of UFO sightings at the MoD between 1991 and 1994 – for his thoughts and expertise on the subject and case. He said: “I’ve seen this video before and I briefly met the couple concerned, though I haven’t investigated the case personally.

“Frankly, there’s not much middle ground here: it’s either a hoax, or something genuinely spooky and – perhaps – out of this world. Sadly, I’d taken early retirement from the MoD before I saw this video.”

“If I had the footage while I was working on the UFO desk, and if I also had access to the camera equipment, I could have secured a proper scientific analysis using intelligence community imagery analysis resources and capabilities. That would quickly have told me if the footage was genuine, or had been faked.”

Earth will become a nature reserve, and people will live in space stations, says Jeff Bezos