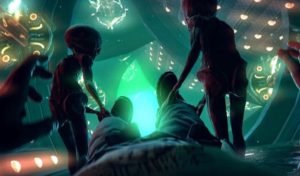 Perhaps one of the most famous alien abduction stories is that of Travis Walton. He claims he has had an alien encounter on November 5th, 1975. He was 22 at the time.

He was working with a logging crew of seven men at the Apache-Sitgreaves National Forest, Arizona. The crew were heading home after work in their pickup truck when they saw strange bright lights coming through the trees.

As their truck rolled slowly along the road, they stopped when they reached a portion of trees where the light was so bright it looked like the sunset, but the sun had set a half an hour before.

The men suddenly became aware that what they were witnessing was a UFO. The driver rolled to a stop on the side of the road, along the edge of the trees for a better look.

He shut off the engine as the mesmerized men observed a golden-colored object hovering twenty feet above the ground through the trees. Walton was suddenly seized with an overwhelming desire to see the spacecraft up close before it flew away, so he got out of the truck and blazingly walked up to it.

The ground was vibrating under his feet. He stood within feet of the craft, basking in its glow. 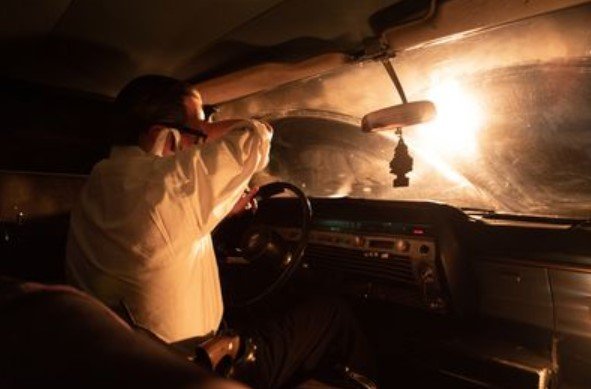 Looking up at the golden disc, Travis stood in awe of it and wondered what mysteries it held. As his mind expanded on the possibilities, the craft began to move oddly and erratically, his friends screamed at Walton to get away from it.

Travis started to move away from the craft when suddenly he felt a tremendous electrifying shock hit him and pass throughout his body. The energy lifted his body above the ground and then hurled him ten feet through the air. When his body hit the ground he felt numb all over.

What The Others Witnessed

What Walton’s friends witnessed was a blast of blinding greenish colored light coming from the aircraft that suddenly hit and lifted his body in the air. His back was arched, his legs and arms outstretched.

He was thrown through the air like a rag doll and landed on the ground in a lifeless heap. His friends thought he was dead because he was not moving. In fear, the crew left Travis behind and went for help.

The men went to the sheriff and told them what happened. The sheriff believed them and sent out a search party after Travis later that night but Walton was gone. His disappearance made news. Search dogs, airplanes, and trackers could not locate the logger. After four days they gave up.

When Walton woke up, he was on a flat surface on his back. At first he thought he was in a hospital, but when his eyes began to adjust to his surroundings, he realized he was in the alien aircraft.

Three small figures in orange-colored surgical coats stood over him. The strange entities were studying him closely. He said they were about five feet tall with very pale and hairless skin, no fingernails, and had small human-like features, but their eyes and heads seemed oddly large.

Terrified, Travis struck out at one of the aliens with his arm, although it was ineffectual in his weakened state. He then managed to get off of the examining table and moved away from the prying eyes and had nowhere to go.

Walton claims the aliens suddenly left the room after his outburst and he wondered through the spacecraft looking for an escape. Eventually, he met up with a tall looking human in a blue space-like suit with a clear helmet.

The stranger never spoke, but took him to another place where two more of these human-looking people were waiting. The other humans never spoke but carefully escorted Travis to an examining table.

He felt powerless as they gently pushed him back on the table and placed a mask over his face. He immediately fell unconscious. When he woke up again, he was laying on the side of a road near Heber, Arizona over thirty miles away from the abduction sight. The craft was hovering over him, then suddenly shot out of sight.

He was gone for five days and was in shock. The story made headlines, and soon a movie about his experience was made (Fire in the Sky).

Still, there were skeptics who wanted to know the truth. Next, Walton was polygraphed by expert, John J. McCarthy, who claims that Walton failed the exam, and felt that Travis had perpetrated a hoax. But McCathy’s outdated methods were called into question.

Travis later took two more polygraphs and passed them. Still, the old polygraph seemed to overshadow him, leading some to believe that he was lying about his ordeal. Walton went on to write the book, “The Walton Experience” which was adapted into the film, “Fire in the Sky.” He has been a guest on Larry King Live and also a guest of several UFO conventions.