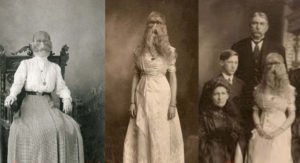 Alice Elizabeth Doherty, who became known as the ‘Minnesota Woolly Girl’, holds the unique distinction of being the only recorded American in history to be born with hypertrichosis lanuginosa.

A condition that is exceedingly rare and unusual, Alice was born with a 2″ mane of fine and silky blond hair on March 14,1887 in Minneapolis. None of her family exhibited similar traits and her parents were at a lost to explain why their baby girl was stricken with the condition.

Her father Aloysius, in particular, found the situation difficult to comprehend but he soon noted that little blue-eyed Alice was a human marvel, one that the public would gladly pay good money to witness.

Alice Doherty was exhibited by her parents as a sideshow attraction from as young as two years old on a local level, however such was the demand to see the “woolly girl” that this quickly led to larger tours of the Midwest.

Later she was presented commercially by her mother and Professor Weller’s One-Man Band throughout the Midwestern United States.

By all accounts, Alice was a bright and playful child. She was as curious in spirit as she to behold. One admirer, a writer from Wisconsin, recorded that the toddler was “as frolicsome as a kitten” while another in Michigan declared her ‘the most miraculous baby ever born”. By the age of 5, the hair on her face measured more than five inches and by her early teens it was closer to 9 inches in length.

Alice was consistently a stand alone exhibit, on display for extended periods of time in what was known as a storefront exhibition. It was a common practice for promoters or family members to rent commercial space in a busy city center, set up a exhibit and sell tickets to the public before moving on to another city. Many predominant human curiosities earned their keep in this manner, and the Doherty family managed to earn a comfortable living from their unique daughter in this way.

Despite the fact that hypertrichosis is exceedingly rare, at the time Alice was touring in the late 1800’s there was actually several others with the condition touring at the same time, Stefan Bibrowski (“Lionel “The Lion Faced Boy”) and Fedor Jefticheievand (“Jo-Jo The Dog Faced Boy”) who both proved to be far more successful in both fame and fortune when compared to Alice Doherty. This was likely due to the fact that they had legendary promoters behind them, Alice, on the other hand, was a quiet American girl managed by well meaning family members.

Alice was born with an unique visage, but inside she was the girl next door. Alice wasn’t an entertainer, and her heart wasn’t committed to becoming one. She was content to retire in financial comfort in Dallas at the age of 28 in 1915, and it is there that she passed away peacefully of unknown causes on June 13, 1933 at the age of 46.

Alice Doherty is interred at the Calvary Hill Cemetery and Mausoleum in Dallas.