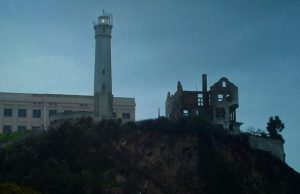 Spanish explorers named it La Isla de los Alcatraces, Island of Pelicans. The isle’s history is as tragic as its ghosts.

Alcatraz was one of the harshest prisons a man could be sentenced to. Al Capone was one if its most notorious inmates. Many people remember the movie, The Birdman of Alcatraz. In reality, the prison wasn’t as depicted.

The Native American Ohlone tribe, believed the island had evil spirits. They banished those who broke their laws to the isle. During the 1850s, the US Army built a fort, living quarters and a lighthouse on the island.

In 1859, Alcatraz became to a military prison. It also housed Confederates and Native Americans in later years. Prisoners slept on the floor. There were no latrines, no heat, and no running water.

Prisoners were given water and bread. Chains with iron balls were attached to their ankles. Conditions were so poor that many called it Hellcatraz. It was the scene of murders and suicides.

– One haunter is Al Capone. During his final days at Alcatraz, Capone would play his banjo in the shower room. People have heard banjo music coming from that room.

– Three men were killed near the door to the utility corridor. A watchman heard clanging behind the door. When he investigated, he saw nothing and the sounds had stopped. When he shut the door, the sounds started again.

– Night watchmen have heard the sounds of running men emanating from the upper tiers. When they investigated, they found nothing.

– One afternoon, an employee heard a scream coming from the dungeons as she was walking in front of cellblock A. She fled and did not report the incident because, on the previous day, another employee reported hearing men’s voices coming from the hospital ward, checking it and finding no one, was ridiculed.

– There is an eeriness about 14D, a solitary confinement cell. It’s always colder than the three similar cells. Several former prison guards spoke of strange things happening in 14D. In the 1940s, a prisoner was locked in the cell and immediately began to scream. He saw something with glowing eyes. His screams lasted into nighttime, then there was silence. In the morning the guards discovered he was dead. There was an expression of horror on his face and marks on his throat indicated strangulation. An autopsy proved he didn’t commit suicide.

– Some of the guards believed one of them killed him, but no one admitted to it. Other guards believed the ghost of a former inmate killed the man. The day after the murder, guards noticed there were too many men when they did a headcount. They saw the face of the dead prisoner at the end of the line. The apparition vanished as they watched it.

– Guards, families who lived on Alcatraz and guests had other ghostly experiences. Witnesses reported sounds of people sobbing and moaning, mysterious smells and cold spots. People have seen see spectral prisoners and soldiers. Guards have jumped to the ground when they heard phantom gunshots and thought prisoners armed with weapons escaped. A empty laundry room smelled of smoke when nothing was burning.

– One warden who did not believe in ghosts heard sounds of a person sobbing emanating from inside the dungeon walls, followed by a blast of ice-cold wind while he was with guests touring the prison.

There is a theory that hauntings, energy imprinted on time and space, occur where there have been tragedies. If true, Alcatraz validates this.