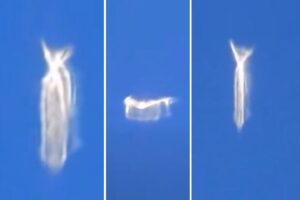 The luminous unidentified object, which smoothly changed its position from horizontal to vertical, made ufologists wonder if it could be an alien ship or a mysterious living organism.

The strange object, changing its shape, was noticed by a passenger on an aircraft at an altitude of 9000 meters.

A German tourist, who captured the UFO on a Nikon P900 camera, claimed that the object flew near the plane for about seven minutes.

In the resulting video, the object begins to transform and stretch. The white lights on the mysterious ship transform into a Y-shaped figure.

At that moment, when the eyewitness tries to focus the lens, the UFO again changes shape from vertical to horizontal.

The video caused heated discussions on the network.

Some commentators believe that there is an object in the video that represents a plasma life form that lives in the upper atmosphere of the Earth.

Meanwhile, meteorologists believe that it was a rare natural phenomenon, formed in the atmosphere by various layers of air.

Earth will become a nature reserve, and people will live in space stations, says Jeff Bezos