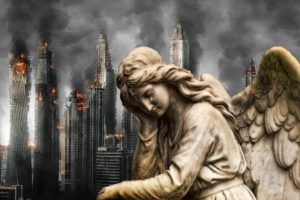 Today, scientists often resort to computer modeling, since it allows them to quickly determine scenarios for the development of a particular problem. Thanks to machines, information processing is accelerated thousands of times, and, moreover, scientists have the opportunity to look at the situation from different angles.

Another study using the power of a computer was carried out by the Massachusetts Institute of Technology. In the end, it was established when humanity will fall according to artificial intelligence.

The result, as always, was frightening, but not new. So, the collapse of human civilization should happen between 2040 and 2050.

According to AI, the planet will not be able to endure the ever-growing population of people, the ruthless extraction of resources and the development of industries that pollute the environment.

Problems will begin in 2020, and by 2030, the world’s population will begin to decline. Even the most economically strong countries will decline.

In 2040, the remaining people will enter the “Agony of Humanity” era. They will have to survive in a harsh world. The final extinction of the last representatives of the race is only a matter of time.

It is interesting that the forecasts coincided with the conclusions of the experts. In 2010, the scientist Peter Valentinovich Turchin predicted that 2020 would be hellish.

And in July of this year, the Alan Turing Research Institute and the Tarapaca University in Chile presented the results of their studies, in which the collapse of humanity is scheduled for 2040-2060.