Agatha Mary Clarissa Miller was born into a wealthy upper-middle-class family in Torquay, Devon on September 15th 1890, her American father, Frederick Miller, died when she was Eleven, and she was brought up and educated by her Irish mother, Clara.

She served in a Devon hospital during the First World War, tending to troops coming back from the trenches, before marrying Archibald Christie, an air force officer at the beginning of the First World War and they had a daughter, Rosalind, who was born in 1919, the couple settled down in London.

Agatha Christie’s first novel introduced the world to the fastidious Belgian detective Hercule Poirot in 1920 and he was closely followed by busybody Miss Marple in 1930. In total she wrote more than 70 detective novels as well as romances and a children’s book under pseudonyms.

Despite her fame as a writer, the one thing Agatha Christie is probably most remembered for is her strange and mysterious disappearance in December 1926. The novelist’s disappearance prompted a nationwide police search. She was 36 years old and already a successful writer when, on December 3 she left her home in Surrey.

Her car was found hanging precariously over the edge of a chalk cliff later the same day. One of the largest manhunts the country had ever seen was mounted with over 1000 police constables, civilians and for the first time airplanes, involved in the search for Agatha Christie.

For 11 days the sole topic of conversation across the country was “what has happened to Agatha Christie?” It was just like a plot from one of her own books. On December 14 1926, Agatha Christie was found, safe and well, living the high-life in a Harrogate hotel! 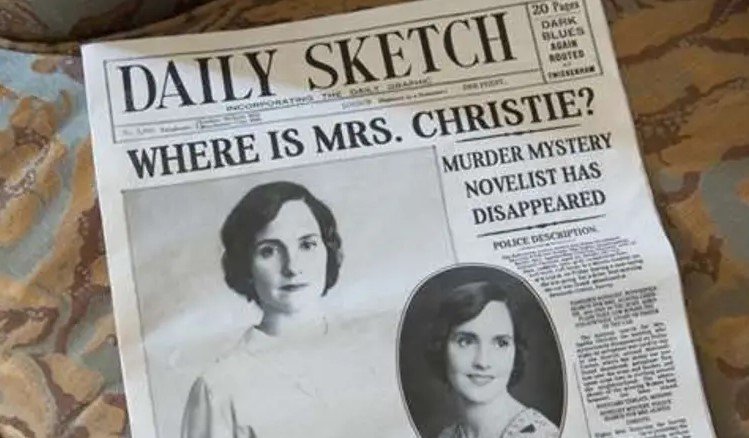 It seems she’d traveled to London and boarded a train to the spa town after having seen an advertisement at the railway station. She then checked into the Swan Hydro, now the Old Swan Hotel, with almost no luggage, under the name of Theresa Neele, her husband’s mistress! Harrogate was a fashionable spa town and everyone was terribly elegant.

Agatha Christie did nothing to arouse suspicions as she thoroughly enjoyed her stay, joining in with the balls, dances and palm court entertainment. She was eventually recognized by a banjo player at the hotel, Mr. Bob Tappin, who alerted the police.

Her husband, Colonel Christie came to collect Agatha immediately but she kept him waiting in the hotel lounge whilst she finished dressing for dinner. But why did she vanish? Agatha Christie never spoke about those missing 11 days of her life and over the years there has been much speculation about what happened between 3rd and 14th December 1926.

Miss Marple made her debut just after Christie’s disappearance. We know her mother had recently died and there were difficulties in the marriage, the Christie’s divorced in 1928, and she was desperately unhappy.

Many people wondered if it was all an elaborate publicity stunt. Her husband said she’d suffered a total memory loss, maybe as a result of the crash which left the car hanging on a cliff edge. Recently, biographer Andrew Norman believes he has uncovered the true reason for her disappearance using medical case studies.

He believes she was in the grip of a rare but increasingly recognized medical condition known as a ‘fugue state’. Best described as a period of out-of-body amnesia induced by stress. In 1930, Christie married archaeologist Sir Max Mallowan, having met him during an archaeological dig. Their marriage was a happy one and lasted until Agatha’s death at the age of 85.

However, the true reasons for her disappearance remains a mystery to this day and she took the story of what really happened to the grave with her in 1976.