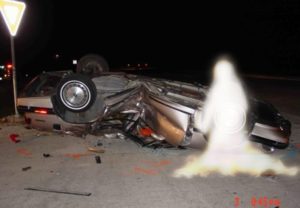 It has been said that a mothers love is without bounds. That certainly appears to have been the case with Christine Skubish. Her love for her 3-year-old son Nick, may have been so great that it brought her back from the dead.

On June 6, 1994, Christine was driving with her son on Highway 50 in the foothills of the Sierra Nevada’s. Their destination was Carson City, they never made it.

Christine family quickly became worried when she and Nick did not arrive in Carson City and contacted police. Despite efforts to find them, the mother and son seemed to have vanished. Then a few days later, a woman named Deborah Hoyt was traveling East on Highway 50 when something caught her eye.

She wasn’t sure what it was, but in the darkness there appeared to be a naked woman on the side of the road. By the time she could stop her vehicle and back up she couldn’t find anything.

Police were called and searched the area in the darkness but came up with nothing. The next day the search continued and with the help of daylight, the car of Christine Skubish was found.

It was located not far from where Deborah Hoyt had reported the phantom figure on the side of the road. Christine was dead, still seat belted in the car and next to her, her son Nick, still very much alive.

How did 3-year-old Nick survive for several days on his own? According to him, his mother was with him the whole time and took care of him.

That doesn’t seem to be possible however as it was determined that Christine Skubish was killed instantly in the crash.

There is no mundane explanation for what occurred. Perhaps what Deborah Hoyt saw on the side of Highway 50, which eventually led to the discovery of Nick, was the ghostly apparition of Christine, making a post life attempt to save the life of her son.