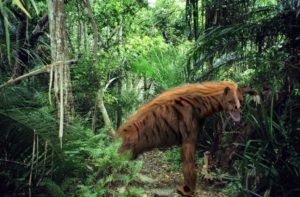 Zoologists claim there are no bears living in Africa, but ursine fossils have been discovered there, so it’s possible that the Nandi Bear isn’t extinct.

The Nandi tribe, for which this bear is named, are the people who have seen this mysterious animal more often than others. According to witnesses’ accounts, this cryptid, an unknown mysterious animal, UMA, has the bears’ characteristics and posture.

It has various names, including chemosit, chimosit, kerit, duba, vere, kikambang and sabrookoo, gadet and geteit. Witnesses have sighted the cryptid since ancient times. Roman scholar Pliny the Elder, wrote about it in the first century CE.

Some witnesses say the cryptid resembles the European brown bear that has relatives in America and Asia. It has thick dark auburn or brown fur, a substantial mane, large teeth, and a long pointed head and snout, said to be comparable to the American brown bear.

According to others, it’s similar to a powerful, standing, tree-climbing hyena, is between four and six feet tall, with high front shoulders and a sloping back.

According to legend, it ate only the brains of its prey and could devastate herds of cattle and sheep.

Most of the sightings were in the early 1900s; two are undated, but they probably happened then.

Major Braithwaite and C. Kenneth Archer saw an animal that they thought was a lioness until they noticed a snout. The standing creature was about four feet five inches tall at the shoulder. The back sloped steeply toward the rump. It moved with a shuffling gait, like a bear’s. The dark brown coat was thick. The cryptid, fled, with a clumsy trot and went into trees by the river where it disappeared

Early 1900’s, Geoffrey Williams, a member of the Nandi Expedition, encountered the UMA. His cousin and he were walking towards Sirgoit Rock when they saw a large animal sitting up on its haunches less than thirty yards away from them. Its posture resembled bear at a zoo, begging for food. It leaned forward and shuffled away in a sideways canter.

1912: Major Toulson sighted the cryptid in the Uasin Gishu plain. One of his boys said that a leopard was near the kitchen. He, immediately, ran to see the creature. He saw a strange animal shuffling, with a bear’s gait, away from the house.

March 1913: N.E.F. Corbett, District Commissioner of Eldoret, encountered the UMA. He was eating lunch by the Sirgoi River, when he almost bumped into the creature that was drinking water. It shuffled way from him in a bear-like manner.

During the construction of the Madadi Railway, workers reported encounters with the bear. One railway employee, Schindler, discovered a succession of canine-like tracks that were eight and a half inches long, with five toes and a long heel. He drew sketches of them.

March 8, 1913: Railway engineer G.W. Hickes, in charge of building the railway through East Africa, saw the bear. Initially, he thought it was a hyena. As he got closer to it, he saw the cryptid had a thickset body, with high withers, a short neck, a squat nose, had a broad rump, very short ears, no visible tail, shaggy legs and large feet.

1913: A native servant saw a strange animal like the one Hickes saw. The creature was standing on its hind legs. A subcontractor saw a similar creature.

It could be a European brown bear wandering south into the African jungles or an Asian bear that migrated.

Some cryptozoologists postulate the Nandi bear is a species of hyena believed to be extinct, an unknown species or a surviving Chalicothere.

Hyenas are fierce hunters who attack and kill herbivores and panthers. Short-faced hyenas, thought to be extinct, were as large as lions and had ursine faces; however it’s doubtful that the Chalicothere theory is valid because this herbivorous animal was related to horses and tapirs, that evolved during the mid-Eocene era.

Some zoologists postulate that the bear is an unknown species of a giant baboon. There are African natives aver it’s a type of monkey. This makes some sense because people who haven’t seen a bear compare it with other animals they have seen; apes being the most likely candidates. Europeans maintain that the animal is a type of bear, especially when they have seen it up close.

Some suggest the cryptid is a type of aardvark that can be seven feet tall, have long tails and short chubby legs. They eat insects, not humans, which is, physically, impossible for them. The bear doesn’t have a long tail.

Around 1920, British Museum authorities investigated the Nandi bear because of accounts that the creature was attacking humans. Skulls and hides of the alleged animals were sent to the museum for examination.

They were those of leopards and hyenas. The pelt of one animal was usually, attached to the skull of another’s. Paw print tracks were sent, but it was impressions of a hyena’s paw superimposed on another one. It’s possible that known animals are mistaken for the bear. Sometimes, when people see something, they see what they want it to be, not what it is.

In addition to various hyenas being misidentified as the elusive UMA, black honey badgers and baboons are also mistaken for it.

Natives continued to report the bear committing violent attacks against them. Kitapmetit Kipet, chief of a Nandi village, claimed the cryptid was a devil that stalked the nganasa, hut settlement, on nights, looking for humans, especially children, to consume.

According to him, it was a half-like man and a half -like enormous, ape-faced bird with a scary, howling roar and a glowing red mouth.

Sightings by Westerners, after the 1920’s are rare, but still happen. Recently, bear hunters, searching for the UNA, reported finding tracks and hearing terrifying howls, unlike those made by known animals.

Could the Nandi Bear Exist?

The elusive animal was considered a myth until it was discovered in 1901. The okapi wasn’t seen in the park since 1959, but it was seen in other areas.

The World Wildlife Fund and the Institut Congolais pour la Conservation de la Nature found seventeen okapi tracks and other evidence of its existence during a recent survey.