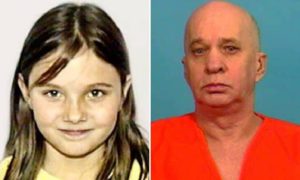 Jessica was a nine year old girl who was born in North Carolina. Her parents separated and her father Mark was granted full custody and they lived with his parents in a double wide trailer in Florida with Mark’s parents. Jessica was an outgoing girl around people she knew and loved but was shy around those she didn’t.

Her grandparents said that she kept to herself as she did not trust anybody. She was very close to her father though and would ride his motorcycle with him and sing karaoke at the local pub. She would even call him at work just to tell him that she loved him. Her bedroom was full of stuffed animals and dolls and her dream was to be an Olympic swimmer or a singer.

Jessica would get up for school the same time her father would get up for work but one morning in February 2005, she did not switch off her alarm. Mark entered her room to find she was missing. He reported her missing immediately as she was not the sort of girl who would just ‘wander off’. The only thing missing from her room was a purple stuffed dolphin toy.

A search took place that day but nothing was found. Police checked the whereabouts of all sex offenders in the area and discovered one was not living at the address he had registered as his residence. John Evander Couey had been in trouble with the law for most of his life from burglary and assault to sexual offences.

Police believed he was now living with his half sister Dorothy Marie Dixon and her boyfriend Matthew Oley Dittrich and their children. They denied that he lived there and police searched the trailer but found nothing. Nineteen days later they again searched the trailer and found blood on the mattress he had been sleeping on. He had left two weeks earlier and went to Georgia.

As the story attracted huge media interest, a woman in a shelter where John Couey was staying recognised him and reported him to police. He was held on charges relating to not registering himself as a sex offender in Georgia.

He was questioned by police and the FBI in relation to Jessica’s disappearance and despite seven requests for a lawyer, he was not allowed access to one. During a polygraph test, he broke down and admitted to abducting Jessica. He gave a video taped confession. He admitted entering the Lunsford home at 3 am through an unlocked door and found Jessica asleep.

He ordered her to stay there for the day while he went to work. He kept her in the closet for three days. During those three days, the police searched the trailer but failed to look in the closet where Jessica was. After the search, he panicked and buried her alive. He led police to the shallow grave beside his sister’s trailer.

Jessica’s body was inside two tied garbage bags, her wrists were bound but she was clutching her purple dolphin. The Autopsy revealed that the official cause of death was suffocation and it would have taken between three and five minutes for Jessica to die.

As the case had received huge media coverage, in order for Couey to have a fair Trial, the Judge moved the case to Miami Dade County. The Prosecution put forward the blood that was found which was Jessicas,semen which belonged to Couey on the mattress in his sister’s trailer and Jessica’s fingerprints in the closet.

The Defense tried to rely on mental illness, abuse John suffered as a child and his low IQ level. The Jury found him guilty of all charges and he was sentenced to the death penalty. The Judge said that ‘sentencing is about a final accounting. It is a closure. A reckoning’. He felt the fear and torture Jessica went through far outweighed any mitigating circumstances which was why he was given the death penalty.

Mark Lunsford fought for a new Bill to be passed that would mean increased prison sentences for sex offenders and electronic tagging for convicted sex offenders who are on probation. The Jessica Lunsford Act was approved and signed into law. John Couey died in prison in 2009 from natural causes.

This was a horrendous case. A young girl was abducted from the place she was supposed to feel safe, her own home, and forced to remain in a dark closet for three days. The fear she must have felt is truly the stuff nightmares are made of. This was a girl who stayed close to her family, who did not speak to strangers and did nothing that would put her in harm’s way.

She simply went to bed one night as normal and a predator, a pure evil figure entered her room and robbed her of her happiness, her innocence and her life. What makes this horrendous case even more harrowing is that if the police had carried out a thorough search of the trailer, Jessica may have been found alive. Cases like this are simply incomprehensible. It would be a terrifying ordeal for any adult and we cannot begin to imagine how Jessica felt.

Couey died before he was punished in any real sense, having only spent two years in prison before his death. Although Jessica’s family felt that a huge weight had been lifted from their shoulders when he died. This case is again another example of how we really do not know people living in our area and unfortunately leaving doors unlocked and welcoming strangers into our home simply cannot happen anymore.