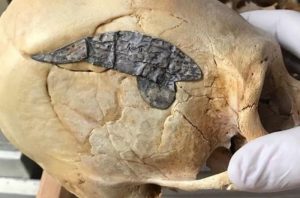 The unique human skull from Peru, about 2,000 years old, is the result of an amazing procedure in which the bones of an oblong skull were held together with a piece of metal in an attempt to heal a wound. Moreover, the patient survived after this operation.

We emphasize once again that the operation was carried out about 2000 years ago.

This skull is currently in the SKELETONS: Museum of Osteolog in Oklahoma, USA. It is believed that the skull belonged to a Peruvian warrior who suffered a serious head injury in battle, possibly from a blow from a baton.

Such an injury to the skull can lead either to disability or, if complicated, to death. Sources believe that the Peruvian surgeons were forced to act as quickly as possible and they decided to fasten the cracked bones of the skull with a metal plate.

According to experts, the soldier safely underwent this operation, but how long he lived after it, whether he suffered from any side effects, and from what he died, is not indicated.

A representative of the museum told reporters that they still do not know what kind of metal it is. Until 2020, the general public knew nothing about the existence of this unique artifact. It was only by chance that someone told about this skull, after which the curators of the museum decided to put it on public display.

“This is a Peruvian elongated skull with metal surgically implanted after the return of a man from battle, estimated to be about 2,000 years old. This is one of the most interesting and oldest pieces in our collection,” said the representative of the museum. 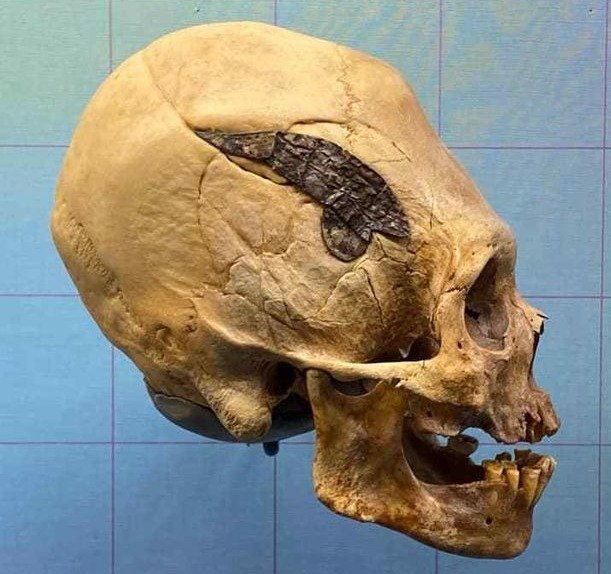 “We don’t have detailed information about this thing, but we do know that the person survived the procedure. Judging by the broken bone around the repair site, you can see that it has healing marks. That is, it was a successful operation.”

Some conspiracy theorists say that no one even wanted to put this skull on public display, since there is no explanation for such a severe surgical operation several thousand years ago.

But anthropologist John Verano of the University of Tulane does not agree with this conclusion.

According to Verano, skull fractures were common injuries in combat during that era due to the fact that weapons were mostly sling and club stones.

According to Verano’s interview with National Geographic, in a trepanation, the Peruvian surgeon would take a very simple instrument and skillfully make a hole in the skull of a living person without normal anesthesia or sterilization.

“They learned early on that such treatments could save lives. We have overwhelming evidence that trepanations in ancient Peru were not performed for some kind of “improvement of consciousness” and not as a purely ritual act, but were associated with the treatment of patients with severe head trauma, especially with a skull fracture,” Verano said.

As for the unusual elongated skull, there have been several studies of Peruvian elongated skulls, and it is suggested that artificially elongated heads were most likely a sign of prestige and high position in society.

Usually, lengthening was performed in early infancy by wrapping the head of the child with a dense cloth or pulling it between two wooden planks.

Archaeologists find elongated skulls not only in Peru, but also in many other countries, including Europe and, in particular, Russia. It seems that thousands of years ago this was a widespread practice around the world.

There are theories that by stretching the skulls, people tried to resemble the Gods and / or stand out as an upper class among the “rabble”.

Alternative theories suggest that in ancient times, humanity met with aliens who had elongated heads, and then people tried to imitate them.