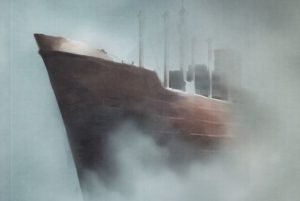 Vice-Admiral Sir George Tyron was one of the most distinguished officers in the British Royal Navy, but he was controlling and expected his orders to be carried out without questions which led to tragedy.

He enjoyed ordering unorthodox formations to keep his officers alert. If they thought a command were odd, they trusted him enough not to question.

On June 22, 1893, he gave what turned out to be a fatal order. Her Majesty’s ships were heading toward the coast of Syria in two parallel columns. They were 1200 yards apart.

He commanded the ships make U-turns towards each other. Staff Commander Thomas-Hawkins-Smith said the ships would have to be at least 1600 yards apart to perform the maneuver. Tyron agreed, but, later went back to his original order.

A crew member hoisted flags to signal the. HMS Camperdown’s captain Rear-Admiral Markham, semaphored he had not understood the signal. His ship led the second column. Tyron signaled asking what was Markham waiting for. The rear admiral obeyed the order.

By the time both captains realized a collision was inevitable, it was too late. The Camperdown rammed the Victoria, creating a large opening around twelve feet below the waterline.

Other ships lowered rescue boats. Tyron ordered them to stop. He commanded the ship go to shore to try to beach her. It was too late; she listed more towards the right, then began to sink.

Orders were given to abandon the ship, but this was also too late. 357 crew members went down with the ship along with its captain.

Around the time of the fatal collision, Lady Tyron was having a party in their London home. There were many guests, the elite of English society. Suddenly, there was a hush.

The attendees saw Tyron, in full dress uniform, walk down the staircase towards them. He went across the room, opened a door and vanished.

What the partiers saw was a crisis apparition.

According to survival theory, a part of the human lives on after the death of the physical body. Apparitions can be seen, heard, felt by touch, smelled and tasted. They have intelligence.

Crisis apparitions appear during a person’s extreme time of distress, usually death. They appear most often at or shortly before or after the time of death.

They want to communicate that they are dying or dead. Some point out their wounds. There have been instances where the person has survived, but thought she or he was dying.

They can appear while the recipient is awake and in dreams.