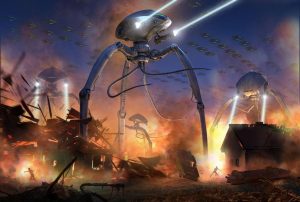 Earthlings’ attempts to establish contacts with extraterrestrial civilizations can be suicidal, because mathematical models show that not all of them can be friendly to us, reports Motherboard.

This follows from calculations published this week by Alberto Caballero, Ph. His calculations show that sending “spam” into space could put earthlings in the same position that the American Indians found themselves in after the arrival of the white conquistadors.

Scientists involved in the search for extraterrestrial intelligence have divided into two camps: optimists who believe (without any reason) that a highly developed civilization simply cannot behave aggressively precisely because of its high development; and alarmists, who are convinced that technological progress has nothing to do with humanism (especially considering that the word “humanism” may not be applicable to a non-humanoid mind at all).

Alberto Caballero translated these abstract philosophical disputes into figures that cannot be refuted, although the author of the work himself admits that it should not be taken uncritically – especially since his main profession is not mathematics, but conflict resolution.

The Spanish scientist was the first who decided to calculate the chances that the signals sent by earthlings into space would fall into the hands of unfriendly extraterrestrial civilizations. Nevertheless, his calculations clearly undermine the positions of those who believe that humanity should, for its own survival, “sit quietly and keep a low profile.”

So, how many malicious extraterrestrial civilizations could be out there? Caballero attempts to answer this question based on an analysis of ‘invasions’ on Earth (countries invading other countries), data regarding the estimated number of extrasolar planets in the Milky Way and a certain degree of guesswork.

The answer he ultimately came up with was 4.

Caballero himself, as befits a conscientious researcher, directly says that it is not possible to prove his conclusions empirically, but for the same reason they cannot be refuted either.

“The probability of extraterrestrial invasion by a civilization whose planet we message is, therefore, around two orders of magnitude lower than the probability of a planet-killer asteroid collision,” he wrote.

Of course, as things stand, we know nothing about any extraterrestrial civilizations that might be out there and basing their actions on what we know of human society is likely a futile exercise.

“We don’t know the mind of extraterrestrials,” Caballero told Motherboard.

“An extraterrestrial civilization may have a brain with a different chemical composition and they might not have our empathy or they might have more psychopathological behaviors.”

“I found this way to do [the study], which has limitations, because we don’t know [what alien minds] would be like.”