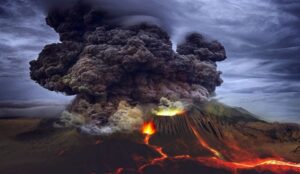 According to geologists, about 10 volcanoes on Earth can cause a super-eruption, which can have a catastrophic effect on the global climate.

One of these lurking “monsters” is hiding under the waters of Lake Toba in Sumatra. It has been the culprit in two super-eruptions in the last one million years. Now scientists are trying to figure out what the chances of new such eruptions are.

An international team of geologists from the University of Geneva (Switzerland) and Peking University (China) are trying to answer this question.

Scientists analyzed the amount of lead and uranium in zircons, a mineral often found in explosive volcanic eruptions. The purpose of the analysis is to learn how to determine how long it will take for a volcano to prepare for super-eruptions.

Unfortunately, the results of the latest study disprove the theory that unusual geological signs may indicate an imminent super-eruption. Instead, magma slowly collected in the magma reservoir until powerful explosions occurred. The results of the geological survey are published in the scientific journal PNAS.

Geologists are most interested in the Toba volcano, since they have no historical data on the reaction of people to an eruption of this magnitude that occurred in the past. Such an event, according to researchers, would affect the global climate and create numerous problems, especially in matters of food supply and population migration.

Volcano Toba has a large depression, which today is filled with meteoric water, scientists explain. An island is located in the center of this lake, which gradually increases in height.

This suggests that magma is gradually accumulating under it. Scientists are trying to find out if the volcano is preparing for another eruption.

Zircon is a mineral found in the products of explosive volcanic eruptions. One of its features is that it accepts uranium into its structure. By measuring the levels of uranium and lead, scientists can determine the age of this mineral. Thus, zircons reveal the time of magma accumulation prior to super-eruptions.

Scientists have found that the first super-eruption occurred about 840 thousand years ago. Prior to this, magma under the volcano accumulated for 1.4 million years.

Geologists have calculated that about 4 cubic kilometers of magma has now accumulated in the Toba magma reservoir, and this rate of accumulation has been fairly stable every thousand years.

Another super-eruption is likely to occur in about 600 thousand years, geologists say. However, this does not mean that small eruptions cannot occur during this time.

The researchers note that their innovative method can be applied to any volcano on the planet, which will help determine which one is close to super-eruption.

Researcher discovered a strange object about 3,000 miles long over the Earth