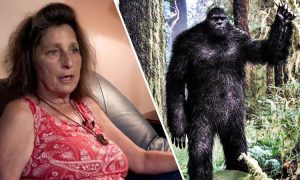 The American bigfoot researcher Linda Godfrey has been in touch with a woman named “Suzy” (pseudonym) from the state of Maine, who as a child communicated with a whole family of bigfoot (yeti).

In 2017, Godfrey was able to interview this woman, where she tells her story in detail. Video in English can be viewed here.

It began in the late 60s when Suzy, who was then seven years old, met a large adult bigfoot near her house, to whom she gave the name Wabou, and two small bigfoot, probably his children.

Suzy actively communicated with the Bigfoot family for several years, until about the early 1970s, after which their meetings became much more rare.

The private house of the Susie family stood on the shore of a small lake, and one day a girl began to find crushed or broken empty shells of mollusks (snails and mussels) on the shore and at night, strange scary sounds came from the nearby forest.

Suzie could not understand who eats shellfish. In this place there were no animals that ate them. And there were many shells, sometimes she even found a small hill of empty shells.

And after some time she met these strange creatures on the shore and it turned out that they were eating molluscs. Suzy describes in detail how a Wabu, covered in dark red wool, squats in the water of a lake and very quickly eats mollusks, biting through the shells with its strong, big teeth.

According to her, Wabu’s teeth were very different from human teeth, they were all the same size and had a square shape. Also, Wabu was great at swimming in the water and even taught Susie how to swim, seating her on his big shoulders.

Once Suzy brought a deck of playing cards to the beach and wanted to play with Waba and the cubs, but they did not understand anything from her explanations. Then Suzy brought them bread and fruit and they loved it.

Then Wabu showed her where they live. It was a shelter in the forest, created from roughly twisted branches. There they spend most of the day going ashore in the evening or at night.
In the dark, their eyes glowed red and when Suzy was playing hide-and-seek with small Bigfoot, she could always make out at dusk where they were hiding because of the glow of their eyes.

Suzy confirms that bigfoot smells really bad. Every time Suzy played with them, she had to take a bath afterwards, otherwise it smelled badly of her too.

Fortunately, her parents did not pay attention to this, they were busy with their own problems and they didn’t care if their daughter was walking all day at the lake or in the forest.

When Linda Godfrey came to Suzy to interview her, Suzie showed her the forest, where the Bigfoot lived and where they still live. Suzy even made a loud summoning sound to call them and after that Linda saw something dark and big behind the trees.

But it flashed only for a second and Linda herself did not see the Bigfoot.

Later, one of the locals said that he also saw a large humanoid creature in these places.