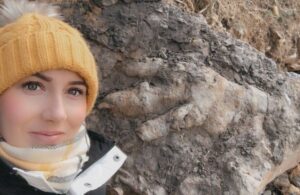 A woman was collecting shellfish for dinner on the coast of Yorkshire in England and accidentally discovered a dinosaur footprint, which is about 175 million years old, reports the Daily Mail.

Archaeologist Marie Woods was shocked when she found a fossil about one meter (3.2 ft) in size near the water.

Experts studied photographs from the site and concluded that the footprint belongs to a Megalosaurus, which lived about 175 million years ago.

“I had originally gone to collect shellfish for dinner, but got completely distracted by this beast!,” she wrote on Twitter.

Experts believe it was left by a large meat-eating dinosaur with a body length of up to 30ft (9m).

However, the unusual find is too close to the water, because of this there is a danger that the trail will be washed away and it will be lost forever.

Experts have already arrived at the place where the dinosaur footprint was found. If they cannot remove it from the water without harming the trail, they will create a three-dimensional copy of it.

Megalosaurus is an extinct genus of large meat-eating theropod dinosaurs of the Middle Jurassic period (Bathonian stage, 166 million years ago) of Southern England.

Although fossils from other areas have been assigned to the genus, the only certain remains of Megalosaurus come from Oxfordshire and date to the late Middle Jurassic.