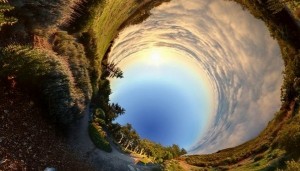 Florina Garcia from Spain woke up one morning in her home, and realized that many things in her life are different than the day before.

Madrid – The truth is out there

Florina Garcia claims that she’s from a parallel world. In fact, one morning she woke up in her bed and she realized that her life is completely different than the day before. That’s why back in 2008. on one website she left a message, explaining what had happened and asking for help from those who had similar experience.

– Four months ago I woke up in the morning in a rented house where I live for seven years. Everything was as usual, I just noticed that the bed sheets I have are different than last night. I did not pay attention to it, I went to work by car, which was parked in the same place.

I arrived at the office where I work for 20 years and there was nothing unusual. But then I realized that my office is not in the same place. On the door it was a different name, and then I learned that I work in another department, for a man I had never seen. Everything was normal for everyone, except for me. I said I was sick and went home – wrote confused Florina.She soon realized that she’s not in four months relationship with the man who lives in the house next to hers.- Apparently I was still with my former partner, with whom I broke up, and my new boyfriend, Augustine does not exist.

Even my family does not remember important things, such as the fact that my sister a few months ago operated shoulder – she said, adding that because of that she believes that she somehow ended up in a parallel world to that in which she lived, and that is why some things are different.However, although there are many theories about parallel universes, Florina’s posts for three years only circulated around the web, and no one has an answer to this unusual case.

Many believe that they are able to pass on a daily basis from one universe to another, and thus improve their lives. They are able to use the so-called process of thinking of transferring to other realities and changing things how they would like to happen.

Also, there are scholars who argue that parallel universes exist and that people will be able to travel from one to the other when we find a way of flying at a speed greater than the speed of light.

The man had a passport of nonexistent state

In the early nineties a man arrived in Tokyo with the passport of a non-existent country. The man was angry that he was thoroughly searched, as if he could not understand what the problem was, and claimed to be from a European country which exists for more than 1,000 years.

Although they did not find anything unusual about him, even had a valid money from some European countries and an international driver’s license, kept him for further testing at the hotel. There he was guarded by police officers, but the next day the man disappeared without a trace and was never found. Many parallel universe theorists then claimed that he had come from another world.

The Curious Tale Of Jan Reynolds And The Devil