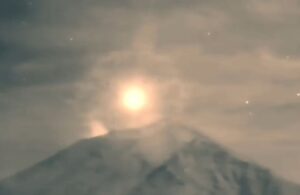 Cameras aimed at a Mexican volcano recorded very unusual UFOs that created something like a portal and flew right into the red-hot mouth of the volcano on March 20, 2021.

Scientists admitted that they had never seen anything like this and they cannot explain what happened.

Nevertheless, after the publication of this video, omniscient commentators appeared who began to promote the version that it was just a “meteorite fall”, while completely ignoring the fact that what happened is completely inconsistent with how meteorites behave.

Here’s a new similar phenomenon, which was recorded by cameras yesterday – March 29, 2021.

We see a similar object that appeared from above and at high speed rushed directly to the center of the crater, but before diving into it – the UFO produced exactly the same “portal” effect as the previous object.

Similar objects with similar effects above the crater of the volcano were recorded by surveillance cameras on March 26, 2021.

UFOs entering and leaving the crater of the active Popocatepetl volcano are constantly recorded by surveillance cameras, but such “portal effects” began to be recorded only in March 2021.