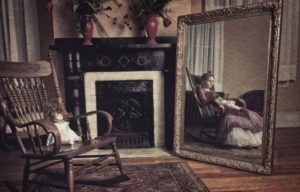 Since mankind first saw its own reflection, we have been fascinated by surfaces that cast our image back to us. Possibly because of that fascination, there is an incredibly wide variety of superstitions, myths and urban legends surrounding mirrors specifically and reflective bodies in general.

That’s the bad news. The good news is that there are a number of folk remedies for relieving the seven years of bad luck. Early American slaves believed that the bad luck could be washed away by immersing the pieces of the broken mirror in south-flowing water for seven hours.

Another tale says that the seven years of bad luck may be kept from taking effect by grinding the shards of the mirror into a fine powder so that they no longer reflect any images at all. Still another says that putting the broken pieces in a bag and burying it will accomplish the same thing.

Mirrors were often used in magical and psychic rituals for scrying – remotely viewing another person or place – and communicating. They could also be used in magical rituals of divination – fortune telling and reading of the future.

This was known as catoptromancy or enoptromancy, and was described in an ancient Greek text as being performed by lowering a mirror on a thread until its lower edge touched the surface of a basin of water. The person performing the ritual would then pray to the appropriate god or goddess before gazing into the reflections created by the combination of water and mirror.

Along those same lines, some ancient cultures believe that mirrors reflected the ‘shadow soul,’ and could show the true nature of the person being reflected. This may have contributed to the legends about vampires and demons having no reflections, since they are said to have no souls to reflect. The absence of a reflection thus reveals their true nature.

In the Jewish religion, it is important to cover all mirrors in a house where someone has died while the family is sitting Shivah (the seven-day mourning period). It is said that if the mirrors aren’t covered, the spirit of the deceased may become trapped in one and not be able to move on to the afterlife.

Some cultures took this further, insisting that mirrors should be covered at night and when people in the house are sleeping, to make sure that a dreamer’s wandering soul doesn’t get trapped in one. In Serbo-Croatian culture, a mirror was sometimes buried with the dead, both to prevent the spirit from wandering and to keep evil men from rising.

One of the most famous mirror-related urban legends is that of Bloody Mary, a story that could take up an entire article by itself. Most often it involved pre-teens and teenagers who dare a friend to go into a bathroom, close the door and turn off the light, then chant some variation of “Bloody Mary…” several times.

There are more variations of the chant than any one person has ever collected, and the number of times the spirit needs to be called out to varies just as widely.

Most times, the person dared will be too afraid of the repercussions to go through with it, and will either bolt out of the room in panic or simply pretend to have done it.

Because going through with it has a terrible cost; according to the stories, calling out to this spirit brings her vengeance down upon the person doing so, resulting in anything from simple terrorizing through murder all the way to being dragged into the mirror, never to be seen again.

Clive Barker brought this concept to the big screen in his movie Candyman, where the titular spirit is called forth (to do really awful things to his summoner) by saying his name three times while looking in a mirror.

Since mirrors are often considered to be portals in some way, one never knows what might come through when the conditions are right (or wrong, as the case may be).

And what could be worse than being in a pitch-black room with a mirror and suddenly hearing something else moving around in the room with you when you know there was nothing there when you came in. If the fright doesn’t kill you, whatever has come through probably will.

Clearly, a mirror in a dark room with no or little light can be a dangerous thing. Viewing a mirror by candlelight also holds many dangers, if myths and legends are to be believed.

One legend says that viewing a mirror by nothing but candlelight will show you your reflection – and that of any entities inhabiting your home, be they ghosts or otherwise. Needless to say, once you become aware of them, they also become aware of you…and odds are good that they won’t be friendly.

There are more superstitions involving mirrors than can easily be counted, but not all of them are negative. For example:

• If a new couple first catch sight of each other in a mirror, they will have a happy marriage.

• To see an image of her future husband, a girl was told to eat an apple while sitting in front of a mirror, then brush her hair. While doing so, an image of the man would appear behind her shoulder.
• If you feel sorrowful or troubled while home alone, with no one to talk to and no apparent way to control your depression, stand before a mirror and gaze into your eyes. Your anxiety should disappear.
• Ancient Chinese believed that mirrors frightened away evil spirits who were scared by their own appearance. If the mirror was broken, the protection was lost.

Needless to say, there are a vastly larger number of negative superstitions related to mirrors, including such things as:

• If a mirror falls and breaks by itself, someone in the house will soon die.
• Someone seeing their reflection in a room where someone has recently died, will soon die themselves.
• Actors believe that it is bad luck to see their reflection while looking over the shoulder of another person.
• Ideally, no mirror should be hung so low that it “cuts off” the tallest household member’s head (doing so may cause headaches).