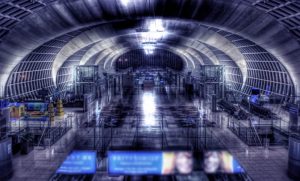 I’ve worked for two years in what was the old airport terminal in a West Texas town. It is a large building for its two current employees.

The building is occupied by some presence. I do not have time to artfully recount the various anecdotes, but here are the basic facts. I spend a great deal of time in the building alone. I hadn’t worked there long when I first started hearing footsteps, keys and coins rattling (as if a man had his hand in his pocket), and smelling on occasion pipe tobacco. (No one here ever smokes a pipe.) For several months the only manifestation was auditory. I then started seeing him in the lobby while I was sitting at my desk (there is a long hall separating the two.

He would just walk in and out of my field of vision. The noises began to include loud knocks and, on one occasion, a sneeze. (Apparently, my “friend” has hayfever.) In the last 6 months, I have seen the apparition in close proximity twice.

Once he walked up to the opposite side of a desk I was working at and vanished just as I looked up. (I thought someone had entered the building quietly and was there with me.) The other time, he appeared just behind a visitor’s shoulder. That time he was hazy and gray, but definitely there. By this point, I am used to him and just continued my conversation as if I had seen nothing.

I know the apparition is male and approximately in his 50s. I get the feeling he was responsible for the building and is just still keeping his eye on things. He feels quite harmless–he and I leave each other alone. However, at one point I was doing some cleaning in the lobby, and it felt like he was standing right at my shoulder.

He was probably just supervising, but he was standing on my last nerve. I did tell him then to quit looking at my backside and to leave me alone. It was the end of the day, so I was quitting anyway. It was never a problem again.

My husband has both heard and seen the apparition at times he’s been in the building with me. My best friend’s little girl, who knew nothing of the haunting, walked into the building one night before we did and came out and asked, “Who is that man standing by the water fountain?” No one was there but us.

One of the salesmen who used to work here has been scared out of the building several times when he’s tried to work late. He would hear someone in the lobby and, when he looked for another person, would find nothing. He’s a big, John Wayne sort that wouldn’t admit to being scared without cause.