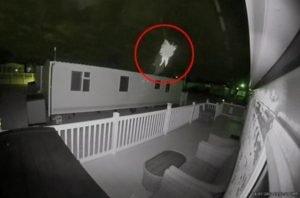 Unusual footage from England captures a mysterious winged anomaly that some have compared to a legendary fairy flitting around a family’s home.

The bizarre scene was reportedly captured by a doorbell camera at Alicia Stoddart’s home in Hemel Hempstead, England.

While visiting her parents’ home in the Clacton community that evening, the security system alerted her that something strange was going on in her home. When she checked her phone to see what triggered the camera, Stoddart was stunned to see a small white figure with huge wings.

“My first thought was, ‘Oh my God, it’s a fairy,'” she recalls. “We racked our brains trying to figure out what it could be and googled possible culprits.” However, according to Stoddart, they were unable to find any common creature that could explain the fairy-like anomaly.

“None of them matched the shape or size of the picture,” she explained, leaving her family “convinced that it was a fairy.” As you might expect, Stoddart’s three children were especially enamored with the video, especially her son, who “believes in all things magical” and, as it turns out, had a tooth that fell out at the moment.

No doubt skeptical observers will assume that the “fairy” in these shots is just an insect, perhaps a moth flying past the camera, and his supernatural appearance is just a shadow and trick of the light.

While it’s likely, Stoddart believes that “we all need a little magic and faith in our lives,” especially in our turbulent times.

The war with the Illuminati has begun: someone blew up the mysterious Georgia Guidestones