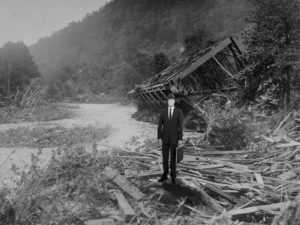 The Bayless Dam in Austin, Pennsylvania, was built in 1909. The dam was originally planned to be 30 feet thick but due to the costs involved, the dam, as finally constructed, had a thickness of just 20 feet.

Within just a few months this proved to be a serious error as the Bayless Dam bowed out some 36 feet under the enormous pressure from the water it held.

Then in January of 1911, a flood hit the area and the dam moved several inches on its foundation as local residents fled to higher ground. The Bayless Dam held, but it was now obvious that the dam posed a major and potentially deadly problem for all those who lived nearby.

The local population was in an extreme state of uneasiness, it was at that point that someone or something appeared among the community.

It was first seen on a train and over the next several months would be reported most often around the rail lines. It appeared to be a man. He was very tall and slender and dressed in all black.

He was seen running on the top of moving rail cars and reported inside of various trains while they were in Austin. He seemed to cause all who saw him to experience a feeling of impending disaster and displayed the rather troublesome ability to vanish at will.

Some believed the black clad figure was a ghost, perhaps of a man killed on the rail line, but by all accounts at the time the man seemed to be quite solid, not at all resembling a phantom being.

The appearance of the mysterious man may have diverted the attention of the people of Austin for a period of months, but all the fears of Austin residents concerning the dam would soon become a horrifying reality.

On September 30th, 1911, a flood far worse than the first, struck Austin. The Bayless Dam collapsed, destroying much of the town and killing at least 78 people.

With everyone’s attention focused on the dam disaster, perhaps no one immediately noticed that it was not only the dam that was gone.

The strange man who had been seen in the area since the first flood was also gone and was never seen again. Much as the Mothman in West Virginia, some believe that the strange man was a harbinger of the impending dam disaster.

If so, it is extremely unfortunate that the warning was not received or was simply ignored.