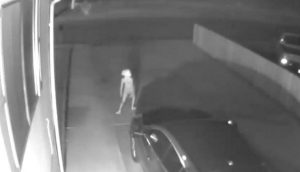 On June 7, US resident Vivian Gomez posted a strange video on her Facebook page (see below), filmed on a video surveillance camera near her house.

“I woke up on Sunday morning and saw THAT on my camera’s recordings. I watched and tried to understand what the hell is this? First, a shadow appears that goes from the front door of my house, and then I saw this creature. Someone else saw something like that?”

“Dobby is free!” Is the most frequent joke in the comments to this video.

To this moment, this video Vivian Gomez has already more than 3.5 million views and tens of thousands of reposts.

“It sits on my bed”: A man filmed a paranormal phenomenon in his bedroom