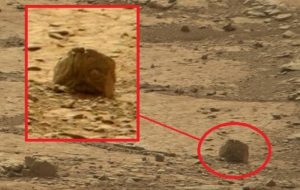 Something very strange has again been found in the image of the surface of Mars taken by the rover Curiosity.

This picture was taken on January 1, 2000, and only recently researchers have seen something on it that resembles a stone “head” with an even round “eye”.

Especially clearly this head with an eye, a toothy mouth and something similar to a nose can be seen if you darken the photo a little. 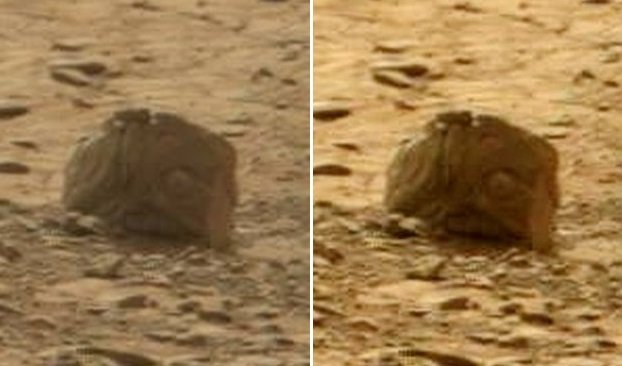 “Mars was once Earth-like in climate, with an ocean and rivers, and for a long period became home to both plant and animal life, including a humanoid civilization.”

“Then, for unfathomable reasons, a massive thermo-nuclear explosion ravaged the centers of the Martian civilization and destroyed the biosphere of the planet.”

This is what dr. John E. Brandenburg of the American Institute of Aeronautics and Astronautics said during the conference AIAA Space on September, 2016.

“We have evidence of two large nuclear explosions on Mars,” said Brandenburg. “The sites are located north of Cydonia and Galaxias Chaos.”

He added that archeological artifacts could possibly be found in both places.

The Xenon Isotope mass from Mars is nearly identical to that found on Earth (as you can see from the above image). This is one of the main factors that has led researchers like Dr. Brandenburg to suggest, that Mars had a developed civilization in the distant past and that this civilization had a terrible and cruel ending.

Could this head be evidence that once upon a time a civilization similar to ours lived on Mars?

The photo in full size can be viewed by the link here or here.