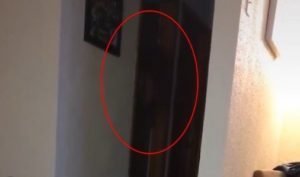 The author of the video sat in her house with her dogs and watched TV when something caught the attention of the dogs and they began to look towards the corridor.

One of the dogs jumped up and ran closer to the corridor, looking at something black in the side doorway. Apparently, the author of the video also saw this black creature.

In the next instant, the black silhouette moves sharply and disappears.

What exactly flashes there in the corridor is impossible to say, it does not have clear boundaries and looks like some kind of shadow. One of the users compared this creature with Babadook.

The Babadook, is a supernatural creature that is said to be the embodiment of grief, anxiety, and depression. While believed to be a spirit or demon, the Babadook is merely a tulpa, a thought-form which can manifest in our plane of reality due to the amount of fear and belief in its existence.

The Babadook most generally appears as a towering, shadowy bogeyman wearing a black coat and hat, with long, claw-like hands and a pale frightening face.