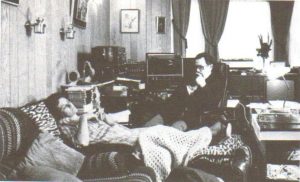 In 1933 educated sixteen-year-old Hungarian Iris Farczády, who had delved into mediumship, claimed to be reincarnated Lucía Altarez de Salvio, a 41-year-old Spanish woman who said she died earlier that year.

After this, Iris spoke in fluent Spanish, a language she hadn’t learned and couldn’t understand any other language. Lucía remained in control and believed Iris was a different person.

In 1935, Karl Röthy, an ethnic German Hungarian researcher, published Lucía’s case in the Journal, Das neue Licht. In a paper dated in 1989, Dr Hubert Larcher, former Director of the Institut Métapsychique International, wrote about this forgotten case of apparent possession.

In 2005, Mary Rose Barrington, Peter Mulacz and Titus Rivas, from The British Society for Psychical Research, taped an interview with Lucía, researched and published an article in its journal.

She said that she wasn’t familiar with Madrid’s public buildings, but correctly described some of its churches. A Cistercian father and professor of theology questioned Lucía for three hours. She gave him specific information about the interior of the church she claimed to have belonged to, describing statues, altars and the embroidery on the altar cloth in detail.

The Hungarian ambassador to Spain interviewed her. He was unimpressed by her mastery of Spanish and her knowledge of Madrid. Ido Ruttkay, the former Hungarian Consul General in Barcelona, showed her 10 engravings of Madrid.

He said she was wrong about everything. Lucía claimed to have been very religious, so it makes sense that she would be familiar with churches and not public buildings.

Ruttkay further tested her. When shown a contrivance consisting of a metal pot suspended within a tripod, she said “brasero” and put her hands over it. It was a pot filled with hot coals that the poor used for heat.

When Ruttkay purposely mishandled an unusual vessel, she took it and showed him its proper usage. A Hungarian girl wouldn’t know what those items were; a Spaniard would.

The SPR team tried to get more information about the case. They requested information in the popular Spanish magazine, Mas All, wrote letters to every Altarez or Salvio they found and searched Madrid archives for birth and death records. These attempts were futile. Despite this, the conclusion was that the case was inexplicable and a mystery.

Lucía’s mastery of Spanish in the Madrilene dialect was precise. Her performance of the Flamenco can’t be learned by watching it. She mentioned the street name, Calle deListawhich had been changed to Calle Ortega yGasset and was unlikely to have been listed in the literature about Madrid.

When she talked about Gypsy healers, she spoke as a Madrid Spaniard would. Lucía knew too much about Madrid and Spain to have been learned it from reading available literature.

This case bears a striking resemblance to the Watseka phenomenon in which Lurancy Vennum possessed Mary Roff. Lurancy maintained Mary needed healing and, once completed, would return. The difference is that Mary did return.

Multiple Personality Disorder, MPD, now called Dissociative Identity Disorder, DID, is the leading psychological theory. There have been documented cases of MPD which included demonic and spirit possession.

The difference between Lucía and MPD cases is that, in cases of MPD, the personalities integrate and, if demonic, there are exorcisms performed before the integration. Lucía remained in control and there was no subconscious memory of Iris which makes this case unique.