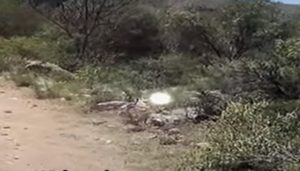 Despite the fact that this video (see below) was filmed in 2014, and posted on YouTube in 2016, it only recently got out of the Spanish-language Internet.

The video was shot in the suburb of Capilla del Monte, Argentina, and this city often appears in reports of Argentine UFO eyewitnesses. According to the assumption of local ufologist Jaime Maussana, somewhere in this area there is a UFO base and that is why flying saucers are often seen here.

But on this clip, not a plate was captured, but a UFO in the form of a small ball glowing brightly in yellow. And this ball was actively pursuing the car of a woman named Sele.

Sele told the ufologist that on November 9, 2014, she and another woman were on the road 10 km from the city.

The road was dirt and uneven and the car was moving slowly, so at some point, Sele got the phone out of boredom and began to take pictures of the surroundings. And only later, when viewing the recording, did she suddenly see that the car had been chasing a little glowing ball for some time, which she had not seen during the shooting.

It is possible that it was not a UFO, but a natural phenomenon, like ball lightning, but the ufologist Maussan is sure that this is something paranormal. He also stated that this is not a glare from the glass of the car, since the object moves independently of the movements of the car.

In the second part of this video, other well-known similar UFOs are shown, in particular, moving through water near the shores of Sweden and pursuing a passenger train in the Chelyabinsk region.