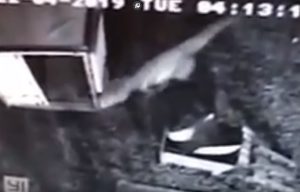 This video (see below) appears to show a strange animal picked up on a security camera in Tbilisi on April 22nd.

What did this camera pick up? A living, breathing Velociraptor?

According to the paleontologists, Velociraptor is a genus of dromaeosaurid theropod dinosaur that lived approximately 75 to 71 million years ago during the latter part of the Cretaceous Period.

So that it is hardly possible that a live Velociraptor remains to this day. Some Internet users think it may be some other animal, while others think it is a fake CGI.

“It left no footprints in what looks like mud, leaving me to believe its CGI﻿”, wrote the Youtube commentator.

However, Tbilisi cryptozoologists are still studying the video, and there are no official statements.

Velociraptor are well known for their role as vicious and cunning killers thanks to their portrayal in the 1990 novel Jurassic Park by Michael Crichton and its 1993 film adaptation, directed by Steven Spielberg.