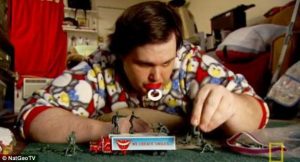 Like any other baby, Stanley sleeps in a crib, wears diapers, and loves nothing better than being comforted by his mother as she bottle feeds him. Except Stanley Thornton is 30-years-old – and his ‘mother’ is really his room-mate. Mr Thornton seeks comfort in being treated like a baby, a condition known as paraphilic infantilism.

The ‘adult baby’ lives out his fantasies at his California apartment, where he has built himself a giant crib, play pen and even a man-sized high chair.

He spends his days playing with Lego as he sucks on his pacifier, and being spoon or bottle-fed by his room-mate Sandra Diaz, who willingly acts as his mother. Tonight viewers will see inside his bizarre alternate world as he features in a National Geographic programme, ‘Taboo: Fantasy Lives’.

He said: ‘For some people being an adult baby is a sexual fetish for them, but for most of us it’s just, you know, you’re doing it to relax, you come home from work, you change into baby mode, you put away your adult stuff and everything goes on hold.’ 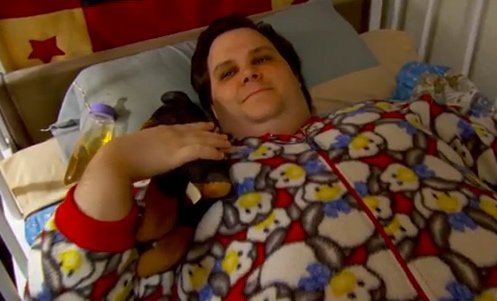 He first began his return to childhood when he was 14, as a way of coping when he started wetting the bed after being abused as a boy. He started wearing diapers when he was 13, and then gradually realised he still wanted the comforts of babyhood – toys,a crib and even a pacifier. At 20, he began ‘day wetting’ and now wears a diaper every day.

He said: ‘The first thought is you start thinking you’re crazy, because this isn’t normal, or at least that’s what you think, you think you’re the only one doing it.

‘Then you go down the road and go on the computer and you find all these other people that are doing it, and you find the name for it.’ 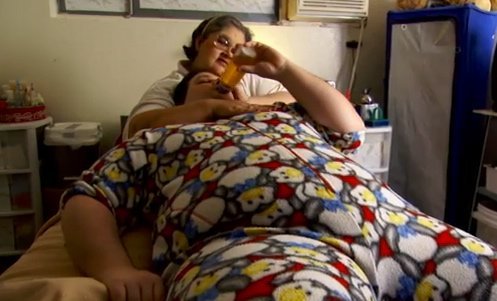 In 2000, he started website for other ‘adult babies’, where members can find ‘mothers or ‘babies’, and tips on where to buy diapers. According to his website, he used to work as a security guard, but had an accident and now claims disability benefit for a heart condition.

Each morning Miss Diaz, a former nurse, wakes him up in his ‘nursery’, where he sleeps in a crib dressed in a playsuit, underneath colourful mobiles hanging from the ceiling.

He said: ‘I like it, it’s very comfortable, it’s easy to get into the baby feel while you’re in it. There’s nothing else like it, waking up in a crib as opposed to a bed.

‘Sleeping in a crib, you wake up as a child and you go on from there, and it’s easy to stay in the same mindset.’

Then Miss Diaz feeds him, either with a bottle or from a spoon.

He has just finished building a giant high-chair, and he reinforced a children’s play area to take his weight so he can play with Lego and stuffed animals. 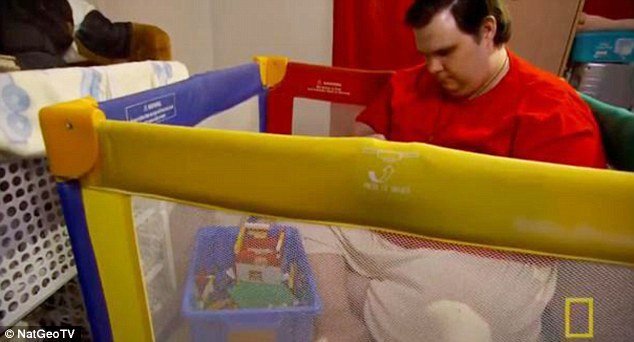 Miss Diaz said: ‘I love him like he is my favourite nephew, he is like my family member who lost his mother, and I’m like the aunt stepping in and saying I’m still here for you.’

Mr Thornton changes into adult clothes when he goes outside, but as soon as he gets home he goes back into ‘baby mode.’ Some infantilists, known as ‘diaper lovers’, see the condition as a sexual fetish.

But Mr Thornton is keen to stress he and other ‘adult babies’ find comfort, not sexual satisfaction, by being treated as a child. Infantilists have no sexual desire towards children.

He said: ‘Being an adult baby I’ve had a couple of different reactions, some good, some not so good.

‘I’ve had some people that are perfectly fine with it and others that are just angry, maybe think you’re automatically a paedophile because you’re too into it.

‘I like to be treated as a baby, just to get the love and affection, safeness, just to go back to a time when you’re caring for a one or two year old.’