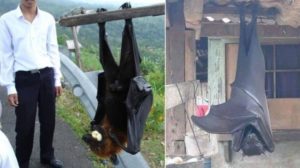 A terrifying photo of a huge bat circled the entire Web and even managed to become viral. This photo was taken and posted on Twitter by a resident of the Philippines Alex Jostar

In the photograph there is a man, and next to him is a bat of almost the same height that hangs head down, as is typical for representatives of this species.

The horror of people lies not only in the size of this creature, but also in its appearance – black, large wing-shaped wings, under which the creature hid long legs.

The author of the photo says that the animal that scared Internet users so much is not uncommon in the regions where he lives.

As it turned out – this is not a monster or a photoshop, since there really is such a kind of animal. The creature featured in the photo is species of bat native to the Philippines and known as a giant golden-crowned flying fox. Lives exclusively in the Philippines.

Although the creature has a rather formidable appearance, it has a very friendly character. The main diet of this creature is various fruits.

These bats have a great variety. For example, in the world there are about 1100 species of bats. Scientists claim that these creatures lived 100 million years ago, that is, together with dinosaurs. Bats bring offspring once a year and only one cub. They live up to thirty years or more.