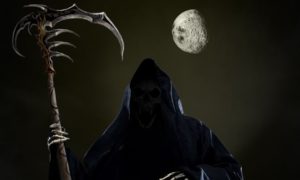 Surveillance footage from Meerut, a city in the Indian state of Uttar Pradesh, captured an unusual sight and the last moments of a person dying under mysterious circumstances.

Mohammed Irshad collapsed on the floor after what seemed to be a black cloud swept through the air moments before he died.

The brother of Irshad, Noor Mohammed, said the deceased was healthy and had left home after having lunch.

“After reaching there, he saw an unnatural thing and died after seeing it”, he said, citing the shadow as the reason for his brother’s death.

The clip was uploaded to Twitter where it has become viral.

Did the surveillance camera somehow capture the real Grim Reaper?

Meerut: In a shocking incident, one Mohd Irshad died immediately after noticing a strange black shadow on Sunday. This video is getting viral on social media now and shocking everyone. Brother Noor said Irshad died after watchitn strange object. @Benarasiyaa@shaileshNBT pic.twitter.com/5C747Mqb0q