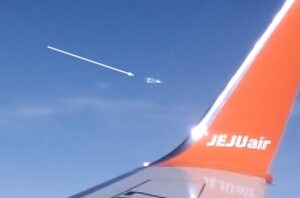 According to passengers and pilots on board the liner, at the time of the meeting with the UFO, the plane was flying on January 23, 2021 at an altitude of 10 thousand meters above the ocean in the region of Karachi, Pakistan.

The plane began a smooth turn along a given route, and at that moment everyone saw a shiny white round UFO flying above and to the right of the plane.

Thankfully, one of the people in the cockpit managed to use their mobile phone to catch the oddity on video.

In the footage, one of the witnesses can be heard exclaiming that “it’s not a balloon. It’s not an aircraft.”

UFO experts who have seen the video compare the object to the notorious Foo Fighters. The term “foo fighter” was used by Allied aircraft pilots during World War II to describe various UFOs or mysterious aerial phenomena seen in the skies over both the European and Pacific theaters of operations.

The objects were variously described as fiery, and glowing red, white, or orange. Some pilots described them as resembling Christmas-tree lights and reported that they seemed to toy with the aircraft, making wild turns before simply vanishing.

Scientists said that the universe is most likely infinite