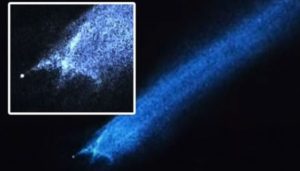 NASA experts are trying to figure out a strange space phenomenon that shocked them recently. They found that an unknown X-shaped object is moving through space at a tremendous speed, which reaches 11 thousand miles per hour.

Scientists scanned the sky to look for asteroids that could pose a potential threat to our planet. Then they spotted an object flying through space. They originally suggested that it might be a comet.

Astronomer Jim Scotty, who took part in the Spacewatch special project, said that scientists had not seen anything like this before. Experts immediately reported their find to NASA.

After that, they tried to measure the X-shaped object. The structure was found to be over 1,500 miles wide. It is unlike any comet that scientists have seen before.

Dr. Scotty has described this strange object in great detail. It has a very long and narrow tail. Something very strange is happening around the top of the object, which specialists cannot explain at the moment.

The object will continue to be monitored. In the near future, it is possible that astronomers or NASA representatives will receive at least some information about what it really is – a comet or something else that no one has seen before.

At the moment, there are no even assumptions about the origin of the object, so it remains only to wait for scientists to figure out the next secret.