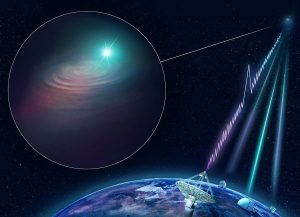 Astronomers have detected a strange radio signal that looks like a heartbeat, reports CNN.

Astronomers estimate that the signal came from a galaxy about a billion light-years away, but the exact location and cause of the signal is unknown. A study detailing the results was published Wednesday in the journal Nature.

Astronomers have detected a constant radio signal from a distant galaxy that is flashing with surprising regularity. Named FRB 20191221A, this fast radio burst is currently the longest observed burst to date.

The first such radio burst was detected in 2007, and since then hundreds of such fast cosmic flares have been detected, coming from various distant points in the universe.

Many bursts emit superbright radio waves that last no more than a few milliseconds. It is known that about 10 percent of them are repeated and have certain patterns.

Fast radio bursts are so fast and unexpected that they are difficult to observe.

One of the resources used to detect them is a radio telescope called the Canadian Hydrogen Intensity Mapping Experiment (CHIME) at the Dominion Radio Radio Astrophysical Observatory in British Columbia, Canada.

This telescope, in operation since 2018, constantly monitors the sky and, in addition to fast radio bursts, is sensitive to radio waves emitted by distant hydrogen in the universe.

Astronomers using CHIME noticed something on December 21, 2019 that immediately caught their attention: a fast radio burst that was “peculiar in many ways,” according to Daniele Michilli, an astronomer at the Institute for Astrophysics and Space Research.

The signal, named FRB 20191221A, lasted up to three seconds, about 1,000 times longer than conventional fast radio bursts.

Michilli was monitoring data coming from CHIME when the spike occurred. This signal is the longest-lasting fast radio burst to date.

“It was unusual,” Michilli said. “Not only was it very long, lasting about three seconds, but it also had periodic peaks that were amazingly accurate, emitting every fraction of a second—boom, boom, boom—like a heartbeat.”

The research team does not know the exact galaxy from which the signal came, and even a billion light-year distance estimate is “highly uncertain,” Michilli said.