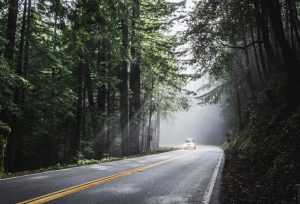 At the beginning of February 2022, a very strange incident happened to three citizens of Argentina. In some incredible way, they covered 26 kilometers of highway in their car in just a minute.

According to the local newspaper Info Huella, a family of three residents of the city of Victorica, La Pampa province, was driving their car along Highway 105 late at night, returning to their home in the neighboring province of San Luis.

At about 12 o’clock in the morning, a married couple and their son reached a road arch called “San Luis”, located on the border of the provinces, and there suddenly saw a lot of lights in the sky.

“When we saw the lights, at first we thought it was a reflection from the lighting of Victorica’s agricultural greenhouses, but then we realized that it was something else, because we were still too far from the city,” the couple said.

After that, according to people, only one minute had passed, so it seemed to them, and suddenly they realized that they were driving along Augustine Bortiri Avenue in Victorique.

When they stopped, they turned their attention to their GPS device, which showed that although they had already driven almost the entire assigned route to their home, they still had 26 km to go.

26 km is just the distance that separates the arch “San Luis”, where they saw strange lights in the sky, and their home in Victorique.

It wasn’t until they’d driven a few blocks down Agustín Bortiri Avenue that their GPS suddenly finally reset to zero.

An interesting detail – all three of them that night for some reason took what happened for granted and did not even discuss it among themselves. But the next day they, as if waking up from a “coma”, began to be surprised and try to remember what had happened to them.

And only then they realized that their memories are confused and they do not know what happened.

Journalists, at their request, do not reveal the identity of all three, mentioning only that this family lives in the countryside and is engaged in farming.

There is an assumption that aliens could kidnap the family, because the phenomenon of “missing time” is very typical for such cases. Especially considering the fact that in La Pampa in 1983 there was a well-known case in Ufology of the abduction of a man named Julio Platner by aliens.

After this story went viral on social networks, a version was put forward that the family could have fallen into a random portal in space-time and teleported 26 km.