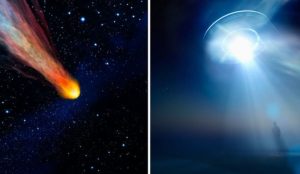 Antonio Geraldo, who lives in the state of Santa Catarina in southern Brazil, recently witnessed an unusual phenomenon that could not be classified.

Coming out onto his balcony, the man saw in the distance above the water a bright ball of fire coming down from the sky. At first, our hero thought that a meteorite was falling, but then an eyewitness realized that the UFO was moving too slowly, like an approaching aircraft. As a result, an unidentified flying object disappeared over the nearest island.

Of course, the Brazilian did not fail to capture what he saw on the camera of the smartphone, because he was surprised and interested.

Ufologists also believe that this could not be a meteorite. The object not only descended at a suspiciously low speed and at a low angle, but also had no tail, characteristic of meteorite.

Thus, quite a few Internet users have come to the conclusion that it is quite possible to talk about an object of artificial origin, quite possibly, about the alien spaceship.