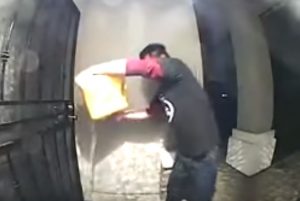 After trying to set fire to his neighbor’s house, a man in California was arrested for arson. The strange incident, caught on Thursday night’s security camera, saw a 38-year-old man empty a full canister of diesel throughout the front porch of his neighbor.

Luckily, he was unable to get a fire started because of his choice of fuel. At the time, the occupants of the house-a woman and two children-were home.

The fact that the man tried to explain his actions by insisting that he had seen a ghost inside the house and was trying to get rid of it was what made the situation particularly disturbing. Ultimately, he was charged with arson and attempted assassination.

“They arrested him,” said the homeowner. “He said that he didn’t have anything against us, that he thought he saw a ghost in our house and to me that’s just even scarier.”

Artificial intelligence can destroy humanity in this century