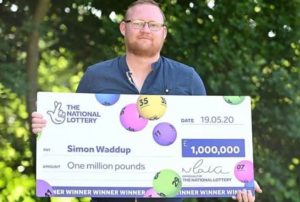 People win the lottery in different ways: some see lucky numbers in a dream, others use memorable dates, their birthdays, numbers from their phone numbers, etc. But this Briton was ordered to buy a lottery ticket by a strange inner voice.

An incredible story happened the other day in the UK with the most ordinary resident of Coventry named Simon Waddap.

Before that, his life was unremarkable, the man worked as an electrician, but for a year now, due to health problems, he could not work as before, so his family did not have enough money.

Everything changed at one moment on May 19, 2020, when the 31-year-old Simon went to the local Aldi supermarket as usual to buy groceries. And when he started shopping, he suddenly heard in his head the insistent voice “Buy a lottery ticket.”

Simon did not believe that it was really possible to win the lottery, so he had never before bought lottery tickets at all. Therefore, he did not particularly listen to his inner voice.

But when he arrived home with groceries, he again heard the same persistent voice in his head with the same request.

This time the voice was even more convincing than in the store and the man could not stand it, he turned on his computer, went to the website of the national British lottery “National Lottery” and bought online only one lottery ticket, paying for it 2.5 pounds.

According to the man, he didn’t even think much about which ticket he chose and took the first one. And he immediately forgot about his ticket. However, the very next day, an SMS message came to Simon’s phone saying that he won in the lottery.

Simon could not believe what was written, and then he decided to call the national lottery and clarify, or is this not a mistake. And then he found out that his ticket won 1 million pounds (more than 1 200 000 dollars).

It is difficult to describe the mental state of this British electrician when he realized that he had won the Jackpot. Simon could fully realize the reality of what was happening only a few days later, when he filled out the necessary documents in the lottery office to receive a win.

The electrician has already decided that part of the money to spend on good clothes and shoes for his family, and he finally wants to go with his daughter to Spain for a vacation. He wants to invest the remaining amount in his own home renovation business.

Once every thousand years, the Earth is shaken by a mysterious cosmic storm