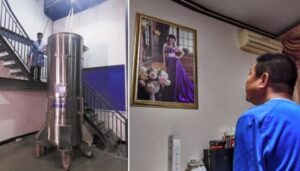 A resident of the Chinese province of Shandong froze the body of his wife who died of lung cancer in the hope of resurrecting her in the future. This is reported by the Mothership.

Gui Junmin’s 49-year-old wife, Zhan Wenlian, had lung cancer. When she was dying, Junming came up with the idea of ​​preserving her body by cryogenic freezing. After that, the Chinese asked his wife if she agreed to such a procedure.

By this point, the cancer had spread to Wenlian’s brain. She could no longer speak and control her facial muscles. The husband asked her to squeeze his hand if she agreed. “Of course she agreed. Otherwise she would not have grabbed my hand, ”he said.

Junmin told his wife, “You just have to get some sleep.” Wenlian’s heart stopped on May 8, 2017. Specialists immediately performed a 55-hour operation to freeze her body.

Before she was placed in a cryogenic tank for 50 years, her husband took one last look at her. She looked as if she was in a dream.

The cryogenic freezing tank is filled with two thousand liters of liquid nitrogen. It maintains a temperature of minus 196 degrees Celsius.

Cryonics is the low-temperature freezing and storage of a human corpse or severed head, with the speculative hope that resurrection may be possible in the future. Cryonics is regarded with skepticism within the mainstream scientific community.