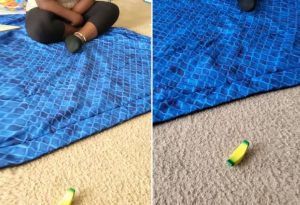 A Reddit user posted a weird video. The video depicts a blue blanket lying on the floor of his house. The surface of the bedspread moves in a strange way, as if something invisible is moving along it.

At the same time, the author of the video also shows that there are no foreign objects under the bedspread, only a smooth carpet.

“It happened yesterday, before I went to work. I would like to think that it was the ghost of my daughter’s dead cat, because the ashes of the cat are kept in our house in an urn,” the author of the video explained.

The girl sits on the same blanket a little further, and after the man turns the blanket over and lowers it to the floor again, movements appear on the blanket again.

This time they look like a cat walks to the edge of the bedspread and walks away. In the comments, users suggested that it might be some kind of fan trick or something hidden inside the bedspread itself.

But many people believed in the “ghost of a cat”, and some told their stories about how the ghost of their deceased pet came to them.

According to the author of the video, there was in fact a small fan in the room at the time of the “arrival of the ghost”, but it was standing to one side on the kitchen table and the air from it was going in a completely different direction.

He also stated that if it really was a kitchen fan effect, it would be often because they had this fan all summer and only noticed the “ghost” yesterday.

He was supported by one of the commentators, who wrote that the version with a fan was strange, because he had never seen fans create a stream of air that would give the impression that some animal like a mouse was crawling under the covers.

For several months, a mysterious triangular black object is located next to the Sun