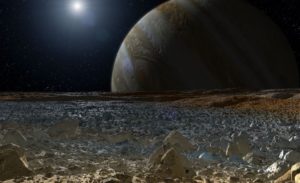 A leading British space scientist says the icy moon of Jupiter is very likely to be home to alien life, reports phys.org.

Europa is the smallest of the four Galilean moons orbiting Jupiter, and the sixth-closest to the planet of all the 79 known moons of Jupiter. It is also the sixth-largest moon in the Solar System.

When it comes to looking for evidence of extraterrestrial life within our own solar system, no target has proved to be more interesting than Europe-a world that is believed to be home to a potentially habitable ocean of liquid water hidden deep under a thick ice shell.

One of the main proponents of this theory is the planetary scientist Professor Monika Grady who discussed her thoughts on the subject during a recent talk at Liverpool Hope University.

She suggests that life forms could not only live in the icy ocean of Europa, but that deep caverns on Mars could also provide a possible sheltered environment for alien organisms.

“When it comes to the prospects of life beyond Earth, it’s almost a racing certainty that there’s life beneath the ice on Europa,” she said. “Elsewhere, if there’s going to be life on Mars, it’s going to be under the surface of the planet.”

“There you’re protected from solar radiation. And that means there’s the possibility of ice remaining in the pores of the rocks, which could act as a source of water.”

“If there is something on Mars, it’s likely to be very small bacteria.”

“But I think we’ve got a better chance of having slightly higher forms of life on Europa, perhaps similar to the intelligence of an octopus.”

Generally, she concludes, the conditions that led to earthly life are likely to have occurred elsewhere as well.

“Our solar system is not a particularly special planetary system, as far as we know, and we still haven’t explored all the stars in the galaxy,” she said.