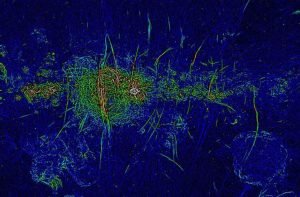 Scientists received images from the radio astronomy observatory, which is equipped with the MeerKAT telescope.

It is reported that in order to obtain detailed images of the Milky Way, scientists collected radio telescope images for about three years and put them together like a puzzle.

As a result, scientists were able to see almost a thousand mysterious strands, as well as radio emission from space objects, such as explosions of supermassive stars and the like. The results of the study were published on the scientific portal The Astrophysical Journal Letters, reports cnn.com.

The above strands have been of interest to scientists for more than forty years and have not yet been fully described by science.

One of the first scientists who studied magnetic filaments, in the course of his research, came to the conclusion that they are cosmic ray electrons. A new study by astronomers will allow us to study the mysterious phenomenon in more depth.

It is noticed that the rays are arranged in a heap and approximately at the same distance from each other. However, at present it is quite difficult to draw any conclusion about the nature of this phenomenon.