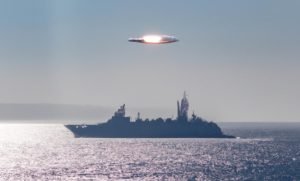 During a typhoon in 2008, Bob McGwier was on board the USS Blue Ridge aircraft carrier. There, he noticed a massive glowing object flying over the ship. Surprisingly, it covered the entire ship from the rain, reports dailystar.co.uk.

A powerful typhoon hit the US Navy aircraft carrier USS Blue Ridge in the sea near Thailand.

But that wasn’t the only bizarre time he has witnessed unidentified objects.

Speaking to Chris Lehto on his YouTube channel, Bob recalled a huge shape hovering over the USS Blue Ridge in 2008.

He explained: “While we were going from Thailand to Vladavarstark doing port calls in 2008, we went through a typhoon and the typhoon had 90 knot winds and 40/50ft seas.

“I was on the bridge and noticed that even though we were in a typhoon and it was raining like mad, there was no rain hitting the ship.

“I looked out the window and looked up and could see a glow above us in the sky, it wasn’t very bright but I could see it.

“Whatever it was was blocking off the rain from the entire ship from stem to stern.”

Bob described the lights as “yellowish” and appeared to be on a “flat surface”.

As he continued watching, the object “suddenly grew brighter” before taking off “straight up”. As soon as it did, the “rain returned”.

“The logical inference is that it was a gigantic craft that took off,” he concluded.

He claimed that about a hundred UFOs were seen flying over nine US Navy warships in a month.