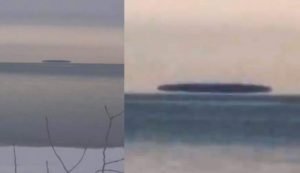 The amazing video, published a few days ago on the World Wide Web, shows North American Lake Erie, stretching across the Canadian province of Ontario, as well as the US states of Ohio, Michigan, New York and Pennsylvania. On the interesting video, a dark, disk-shaped object of enormous size is clearly visible, hovering above the water horizon.

Some expectedly believed that it was an alien ship. For others, this is a lenticular cloud or a rare mirage called Fata Morgana.

In any case, the video interested many, especially since the experts determined that the recording was genuine, which means there was something over Erie Lake at that moment.

It is a pity that such cases mostly remain mysterious to us.