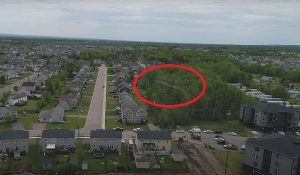 A resident of the city of Moncton in New Brunswick, Canada, launched a drone back in 2018 to photograph the surroundings of the city from above.

But only recently he looked through his videos and saw a strange high-speed object on one of them.

The UFO rushes by at such a high speed that even in slow motion it is difficult to see it, it looks like a whitish elongated “spear”.

According to the owner of the drone, the object flew so close to the drone that a little more and could have brought it down.

At first, he believed that this object was a bird or even another drone. But then he rejected both versions, because not a single bird flies at such a speed, as there are no such drones (at least civilian ones).

He also noticed that when he launched his drone over these houses, he did not hear any extraneous sounds in the sky, that is, the high-speed object was also completely silent.